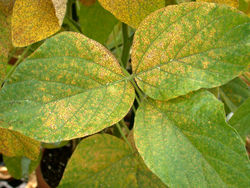 This species causes a serious foliar disease of soybean. It is native to the Asia region has been known for many years in an area from India to Australia to Japan and China. It was recorded from Hawai'i in 1994 and subsequently spread to Africa (first record in 1997) and to South Americas (first record in 2001). It has been reported from North America since 2004. Large-scale outbreaks occurred in South America between 2001-2004. In Brazil, yield losses were estimated at US$ 500 million in 2003. In Australia, losses of 60-70% have been reported and similar losses have been estimated in other regions.

Infections are initiated by urediniospores and start with small, tan-coloured leaf lesions. These enlarge and produce uredinia as early as one week after the infection, especially on the lower leaf surfaces. The disease spreads rapidly through a soybean field, causing defoliation.

The fungus also infects some other leguminous crops and weeds which can be hosts between soybean seasons. However, the fungus only overwinters in warmer regions without extended frost periods. In North America, the fungus spreads by air currents every year from the Gulf Coast region to the soybean growing areas in the north. Thus, the extent of outbreaks in the north depends on weather events early in the soybean season like suitable wind patterns and protection of the spores from UV light by cloud covers.

For management, monitoring is very important to detect the first signs of infection. Once the fungus has arrived in a field, only a few days remain for using fungicides before treatment costs become uneconomical. Early planting is also recommended in high risk areas. Soybean cultivars with satisfactory resistance have not yet been developed.

Uredinia are cone-shaped and 0.1-0.2 mm large. Urediniospores are egg-shaped to spherical and about 20-30 x 20 µm large, covered with small spines. Teliospores and basidiospores are also produced, but the latter have been only observed under laboratory conditions. A sexual stage of the fungus is unknown.