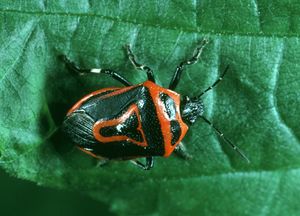 This stinkbug is a foliage hunting predator of chrysomelid larvae and eggs. It is native to North and Central America and has been released into Europe against the Colorado potato beetle (Leptinotarsa decemlineata). However, it failed to become established in most parts of Europe and has been only recorded from the Balkans and from Turkey (e.g. Kivan, 2004).

In North America, P. bioculatus is regarded as a useful predator of the Colorado potato beetle, preying on both eggs and larvae. However, it rarely occurs in large enough numbers to give adequate control. It is commercially available and inundative releases can be effective against L. decemlineata (e.g. Biever & Chauvin, 1992).

The adult stinkbug is around 10-12 mm long with a variable colouration, ranging from a white to a red background. There are always 2 elongated dark spots on the pronotum and the hemelytra are mostly dark with a white or red Y-shaped mark.