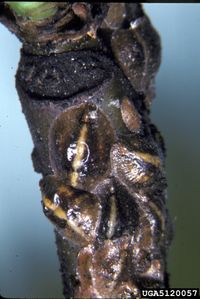 This genus of soft scales contains around 15 species and is widely distributed in temperate regions. The scales often infest trees and other woody plants. Several species are important agricultural pests like the European fruit lecanium, Parthenolecanium corni, which has been accidentally introduced into the Americas. It is also a vector of plant viruses.

Parthenolecanium scales are in general brownish in colour, oval and covex in shape with a typical length of 3-5 mm. The morphological characters include a ventral submarginal band of tubular duct and few ducts in the central areas.