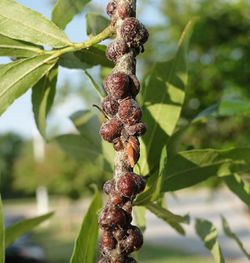 This soft scale is native to eastern North America, where it feeds on the branches of willow oak (Quercus phellos) and other species of oak trees. Outbreaks develop mainly in urban environments, with high scale densities causing sooty mould, dieback, and reduced tree growth. Such outbreaks are often associated with "urban heat islands", where scale densities can be more than 10x higher compared to cooler locations (Meineke et al., 2013).

P. quercifex females form ovisacs, in which they produce up to 3000 eggs over a period of approximately 4 weeks. Eggs typically hatch within a week. Crawlers (first instars) migrate to leaves where they feed during the summer. In autumn, they moult to second instars and migrate back to the branches. Here they overwinter as second instars and develop into adults in early spring.