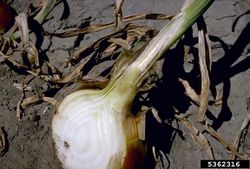 The bacterium is widespread in tropical and subtropical regions. It causes centre rot of onion, maize white spot and other diseases like palea browning of rice in paddy fields which diminishes the quality of hulled rice. Frequently economic losses result from these diseases. The bacterium is apparently native to southern Africa and has been introduced into the Americas, where it is transmitted by the thrips Frankliniella fusca. It has been also reported from Asia.