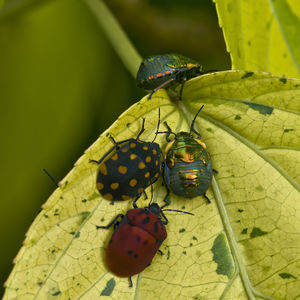 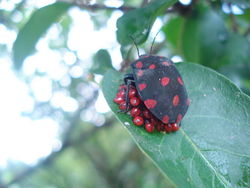 This species of jewel bug is found in South and Central America. It is a pest of physic nut and other crops, e.g. coffee or rubber trees. The nymphs and adults feed on the fruits and other developing parts of the plants.

The adults have a globoid scutellum covering the wings and are often black or dark purple, with 22 red or yellow spots. The appearance is similar to Pachycoris klugii. However, other colour patterns have been described. The females guard their eggs and young nymphs to protect them from parasitoids.