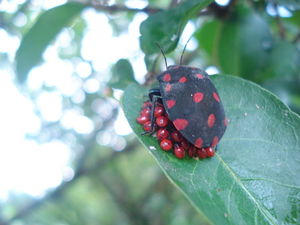 This genus of jewel bugs includes around 20 species. Nymphs and adults are often colourful and females of several species are known to guard their eggs and nymphs, protecting them from parasitoids.

Some species (e.g. Pachycoris klugii) are regarded as pests of physic nut (Jatropha curcas) and other crops in the Americas. They suck the flowers and fruits. During feeding, toxins are injected into the plant which results in a yield reduction.