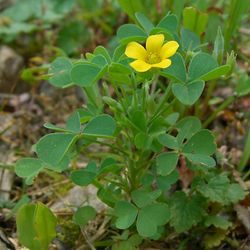 The family Oxalidaceae is widely distributed and contains around 600 species of herbaceous and woody plants. They are usually small, but a few are bushes and trees like those of the genus Averrhoa which includes the cultivated carambola or starfruit (A. carambola). Oxalis (wood sorrels) is the largest genus. It is common in the tropics and subtropics and typically has colourful flowers and clover-like leaves. Several species are edible and have a sour taste due to a high content of oxalic acid.

Some species of Oxalis are grown as crop or ornamentals, but a number are agricultural and/or environmental weeds. For example, yellow woodsorrel (Oxalis stricta) has a nearly world-wide distribution and is invasive in some regions.