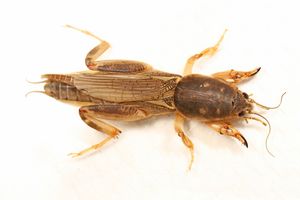 Like the other Neoscapteriscus species found in North America, this mole cricket has been introduced from South America around 1900. Originally established in Georgia in 1904, it spread quickly through the south-eastern U.S., reached Texas in 1925 (Walker & Nickle, 1981), and has been reported from California since 2014 (Dillman et al., 2014).

N. borellii is a pest of pastures and turf grass, feeding on the roots. It also attacks several agricultural crops. However, compared to Neoscapteriscus vicinus and N. abbreviatus, it is more carnivorous than herbivorous and therefore less damaging.