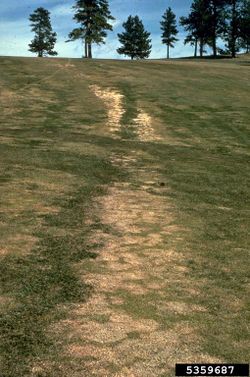 The fungus is found in temperate regions. It causes a Fusarium-like disease of wheat, rye, barley, oat and grasses, resulting in drying up of the ears, and rotting of the grains. Infections usually start through airborne ascospores released from perithecia on plant residues left in the field. The release depends on weather conditions and can already start in autumn. The disease then develops under the snow cover and after the snow melts yellowish patches appear on the crop or turf. The leaves become pale with a pinkish cover of conidia. When it becomes warmer and drier the plants can recover. The small black perithecia develop in autumn.

The fungus also causes seedling blight immediately after the snow melts, usually when seeds are infected from a previous outbreak. This may result in a 80% reduction in seed germination. Seedling blight can be controlled by treating the seeds with fungicides.

The conidia are Fusarium-like, spindle-shaped, usually 3 septate and about 10-30 x 2.5-5 µm large. The ascospores are elliptical, 1-3 septate and measure around 50-70 x 7-9 µm. The fungus is not known to produce mycotoxins.