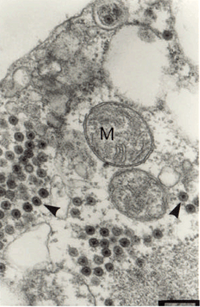 The virus is related to the Maize rough dwarf virus. It causes the Rio Cuarto disease (RCD) which is a serious maize disease in Argentina and is transmitted by the plant hopper Delphacodes kuscheli. The symptoms include dwarfing and an overgrowth of tissue on the veins in the back of the leaves, termed enation.