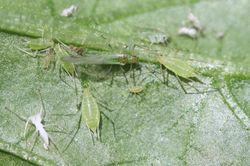 The aphid is a polyphagous pest which attacks for example potatoes, other solanaceous crops, vegetables and ornamentals. It is native to North America, but now has a nearly world-wide distribution. It is common in temperate and subtropical regions. Feeding damage can be significant (e.g. see Walgenbach, 1997). In addition, M. euphorbiae transmits several dozen plant viruses, including, for example, Potato leafroll virus, Potato virus Y and Papaya ringspot virus.

In the introduced regions, populations consist only of females. These overwinter on weeds and propagate parthenogenetically by giving live birth. Winged forms are produced when population densities are high. In North America, males and females can be found, with females laying eggs which overwinter. The development from egg to mature adult lasts around 1-2 weeks under favourable conditions. There may be up to 10 generations during a season.

Mature females are normally wingless, 2-4 mm long, with long siphunculi and the antennae longer than the body. The colour is green, but the tip of the antennae and parts of the legs are darker. There is often a stripe of darker green along the back. The tips of the siphunculi is dark. A pink colour form can be also found.