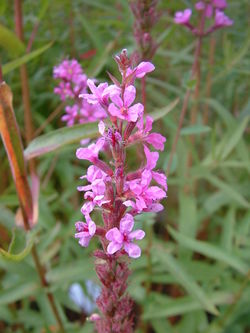 This species of loosestrife is native to eastern Europe and western Asia. It has a similar appearance to purple loosestrife and both species are difficult to distinguish. L. virgatum has been introduced into North America, where it has established in some areas and is regarded as a noxious weed. It has the potential to invade and spread within wetlands.