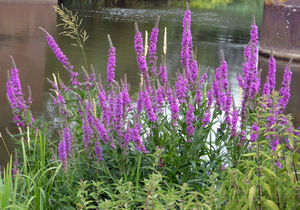 This species is native to Europe, Asia and northern Africa. It is also found in southern Australia and New Zealand. It has been apparently accidentally introduced into North America around 1800, where it has become an important invasive weed of wetlands which can seriously degrade wildlife habitats.

In North America, purple loosestrife can form dense homogeneous stands that "overrun" wetlands, eliminating native plants and choking waterways. It often spreads along such waterways. However, the impact of this weed is also sometimes exaggerated (Lavoie, 2010).

A number of biological control agents have been introduced into North America against purple loosestrife. Especially beetles are regarded as effective, like Neogalerucella calmariensis, Galerucella pusilla, or Hylobius transversovittatus.