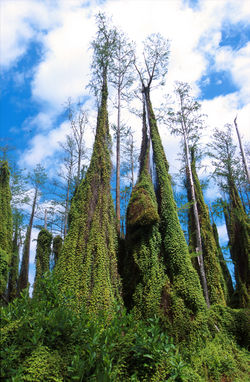 The weed is native in tropical parts of Africa, Asia and the Australia/Pacific region. In the 1960's, it became established on the eastern coast of Florida and has since spread to other parts of that state. Apart from being an environmental weed which climbs trees, it can also enable low-intensity fires to reach the tree canopy and cause tree death.

The weed has underground rhizomes from which it can rapidly re-grow, making control very difficult. In 1998, a biological control program was started and since 2005, several species of exotic natural enemies have been released, e.g. the galling mite Floracarus perrepae or the moth Neomusotima conspurcatalis, both of which have become established and proved to effective.