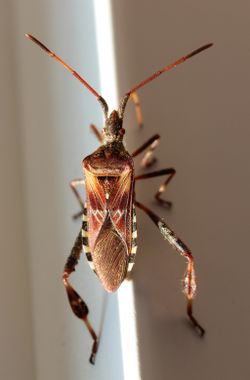 This bug is believes to be native to the western parts of North America and has been also recorded in eastern North America since the 1990s. It was accidentally introduced into Europe (first record from Italy in 1999) where it is now wide-spread and occurs from South Italy to Scandinavia. Since then, various countries in Asia, as well as South and Central America have been also invaded.

L. occidentalis feeds on the cones of various conifer species, mainly from the family Pinaceae, causing cone abortion and reducing seed set. It is mainly a problem in seed orchards. Feeding on the foliage of conifers has also been observed occasionally. It can further invade homes to overwinter.