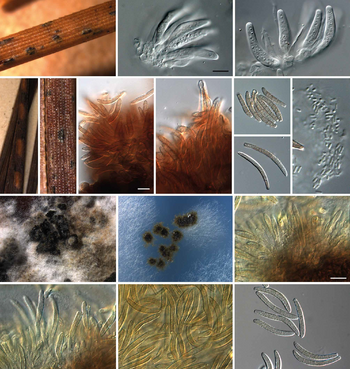 The fungus causes brown-spot needle blight of pine in North and South America. It has has been also found in Europe and temperate parts of Asia. The symptoms resemble those caused by Dothistroma species, relatives of L. acicola. Infected needles develop yellow to orange spots that become necrotic in the centre with a prominent yellow margin. As the disease progresses, lesions coalesce and cause defoliation and dieback. Over several years this may lead to branch and tree death.

The fungus can overwinter in asexual fruiting bodies (acervuli), in sexually formed ascostromata, or as vegetative mycelium. In spring, conidia and ascospores are released and new infections occur through small wounds or through the stomata of the needles. The infection process is aided by the release of toxins. Acervuli develop on the newly infected needles, and conidia are released in gelatinous masses and spread by rain. Ascospores are typically formed on dead needles that had been infected during the previous year. They disperse by wind and rain. Long distance movement is likely to involve the transport of infected plant material.