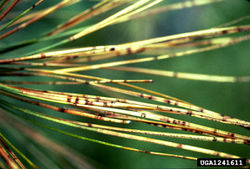 This genus of fungi contains two plant pathogenic species which cause serious diseases on pine trees. They infect the needles that typically show reddish-brown bands. Infected needles become necrotic, are cast and the diseases can lead to complete defoliation. The fungi are widely distributed and the spores are air-borne and can disperse over long distances. The genus is mainly characterized by the DNA structure of the species.