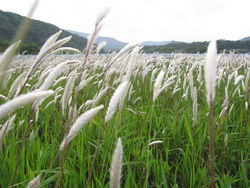 The weed is native to tropical and subtropical areas of eastern Asia and invasive in parts of America and Africa. For example, it was introduced into south-eastern North America in the early 20th century.

I. cylindrica is a serious agricultural and environmental weed, even in its native range. It can form monocultures, especially in disturbed habitats, e.g. after slashing and burning. See also the closely related species Imperata brasiliensis.

The species can grow to a height of more than 2 m. It is also grown as an ornamental, especially red varieties. For details see the respective page in Wikipedia.