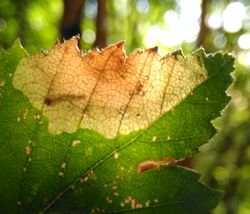 Heterarthrus nemoratus leaf mine on birch leaf, with larva visible in leaf (click on image to enlarge it)
Source: Wikimedia Commons

This birch leaf-mining sawfly is native to central and northern parts of Europe, but is introduced in North America. It was first discovered in eastern Canada in 1905 from where it spread southwards and westwards, causing serious outbreaks on birch trees. Heavy damage resulted in reduced growth and branch death, but not in tree death. Hazelnut and alder were also sometimes attacked.

In North America, H. nemoratus reproduces parthenogenetically and males have never been found. Females insert eggs singly at the edges of birch leaves. Hatching larvae form blotch mines in which they develop for around 2 months. The prepupa overwinters inside the mine of the fallen leaf. Several parasitoids were introduced from Europe and at least 2 became established, including Chrysocharis laricinellae. The leaf-miner population declined substantially during the biological control program.