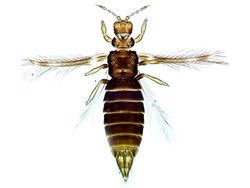 This genus of thrips includes 9 species which are mainly found in Africa where they feed on the leaves of various plants. Two species are regarded as pests and are found in other regions. For example, Hercinothrips femoralis is widely distributed and a polyphagous pest, infesting among others crops like vegetables and ornamentals.