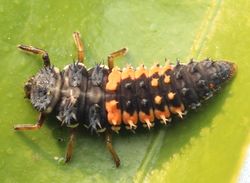 This species of ladybeetle is a polyphagous predator which is native to Asia. It has been used against aphids and was introduced into North America (since 1916) and Europe (since 1982) for their biological control. It was also released in other regions, e.g. in Argentina since 1986.

However, the insect has now reached pest status itself in several countries as it damages and contaminates grapes and other fruits (e.g. Kögel et al. 2012). In addition, it is often considered an invasive environmental pest, because it has largely replaced native ladybeetles in many areas and preys on these and other beneficial insects (see Brown et al. 2015). In view of these negative effects, the use of flightless strains for biological control has been studied (e.g. Seko et al., 2014).

H. axyridis individuals show strikingly different coloration pattern with the number of spots varying between 0 and 22 and the background colour being either red, yellowish orange or black (in the latter case the spots are red). The adults are 6-8 mm long and the whole life-cycle lasts about 6 weeks to 1 month. The adults show some aggregation behaviour like other ladybeetles.