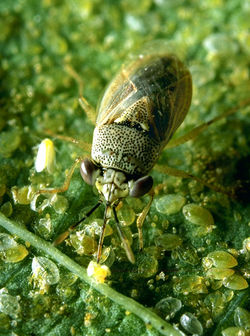 The species of Geocoris (family Geocoridae) are small bugs, 3-4 mm long, that are mainly regarded as beneficial insect predators. They feed on a variety of pest insects and mites. When prey is scarce they will also feed on plants or pollen but usually cause little damage. The prey consists mainly of spider mites and aphids, but includes also scale insects, whiteflies, leafhoppers and other small insects. The members of the genus is characterized by their large eyes which do not have stalks.