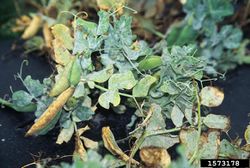 The fungus is wide-spread in temperate regions and infects peas and other leguminous crops. It is air-borne and also seed-borne. Air-borne spores can cause infections of the leaves which then develop typical powdery mildew symptoms. Outbreaks develop mainly in the summer during warm dry days followed by cool nights. The disease incidence can reach levels of 90% and yield losses of up to 50% have been reported from susceptible cultivars.

Management of the disease relies mainly on resistant cultivars. Crop rotation and removal of infected plant debris by ploughing is also recommended.

Conidia are ellipsoid to cylindrical with a size of about 30-50 x 15-20 µm. The sexual fruiting bodies (chasmothecia) are spherical, black and around 100 µm in diameter. They have numerous appendages which are usually unbranched. The ascospores are egg-shaped and around 20 x 15 µm large.