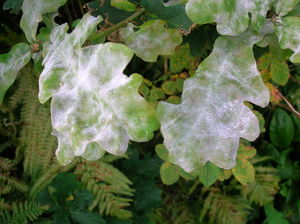 The fungus is widely distributed, e.g. in Europe and Asia. It causes a powdery mildew disease on oak and also infects several other plants. The morphology resembles that of other Erysiphe species and includes lobed appressoria, cylindrical conidiophores, and cylindrical or slightly ellipsoid conidia that are formed singly and measure around 30-40 x 15-20 µm. Chasmothecia are dark brown and spherical, about 80-100 µm in diameter, with appendages that are often double branches at the top. Ascospores are ellipsoid with a size of around 15-20 x 10 µm.