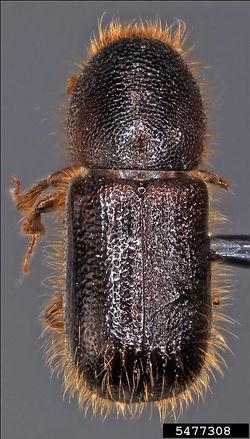 This bark beetle is found in parts of north-western North America. Among the species of Dryocoetes, D. confusus is the only bark beetle that infests healthy trees. Mainly fir trees like Abies lasiocarpa are attacked, but spruce and pine trees can be also hosts. The needles of infested trees turn reddish brown, usually followed by tree death. The needles are still retained for several years after death of the trees, enabling aerial assessment of the infestation (see image below). In outbreak situations, high numbers of fir trees may be killed and high beetle populations tend to persist over many years. However, usually less than 5% of the fir trees in a given area are killed per year.

Adults and larvae form irregular galleries as indicated by the Latin name. The adults are around 3-4 mm long and brown to dark brown. The cuticle is covered by few hairs in males, but females have a denser cover with a tuft of orange hairs on the frons above the mouthparts. Infestations by D. confusus are associated with the fungus Grosmannia dryocoetidis (Kendrick & Molnar, 1965).

For details see the BugwoodWiki.