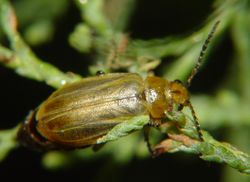 The beetle is native in the Mediterranean region up to southern parts of Russia and was introduced in 2003 into California and Texas, U.S.A. against invasive saltcedar shrubs/trees (Tamarix). In these areas previous releases of a closely related species (Diorhabda carinulata) had been unsuccessful. It has become established, causing defoliation and a reduction of saltcedar stands.

The eggs are laid on the leaves where the three larval stages feed. The mature larvae pupate in the ground and there are several generations per year. The adults overwinter in the leaf litter under the trees.

Note: In literature before 2009, other species like Diorhabda carinulata and Diorhabda sublineata have been also referred to as "Diorhabda elongata".