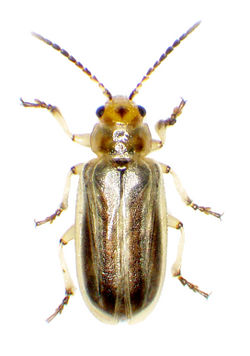 The beetle has been introduced in 2001 from China and Kazakhstan into North America against invasive saltcedar shrubs/trees, like Tamarix ramosissima. It established quickly at many release sites, causing extensive defoliation of saltcedar and reduction of the weed populations. However, it failed to establish in California, apparently due to environmental factors and intense predation by ants.

The eggs are laid on the leaves where the three larval stages feed. The mature larvae pupate in the ground and the development from egg to mature adult lasts 4-5 weeks in the summer. There are 2-4 generations per year and the adults overwinter in the leaf litter under the trees.