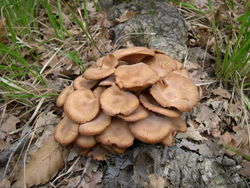 Desarmillaria tabescens in Italy (click on image to enlarge it)
Source: Wikimedia Commons

This fungus is widely distributed and attacks various types of forest and fruit trees, causing root rot diseases. In fruit trees, it can be a common cause of Armillaria root rot, with peaches and almonds often being seriously affected. For example, in south-eastern North America, the disease kills 3-4% of the peach trees per year, with an economic loss of $8 million annually. In these orchards, the disease is mainly a problem during replanting, because the fungus can survive in the soil for many years inside the infected roots (Miller et al., 2020).

On fruit trees, early symptoms include leaf curling and leaf bronzing, followed by wilting, branch dieback, and the formation of large darkly coloured cankers. In addition, mycelial fans form under the affected branches, large tree roots are covered by reddish-brown, shoestring-like rhizomorphs, and brownish fruiting bodies (mushrooms) form at the base of the infected trees. Root-to-root contact appears to be the main mode of spread of the fungus from diseased to healthy trees.

Management like soil fumigation or complete removal of infected trees is difficult and usually uneconomical. However, preventive root-collar excavation has shown some promise (Miller et al., 2020).