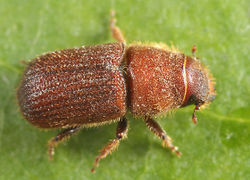 This is a large bark beetle, native to North America where it is usually a minor pest of pine trees and attacks mainly injured or stressed trees. However, the recent accidental introduction into China in the 1990s has led to the death of millions of pine trees. Attacked trees are characterized by the large red pitch tubes near the base of the tree and yellowing of the needles.

The adult is reddish-brown, females are 6-10 mm long, males 5-8 mm. Both larvae and adults feed on the phloem of the host tree. The lower parts of the trunk and the roots are attacked. Infestations are assisted by the invasion of sapstain fungi like Leptographium procerum which are vectored by the beetle.