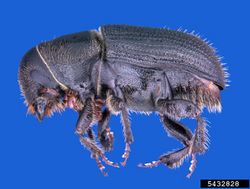 This bark beetle is found in the southeastern and eastern parts of the United States. It mainly attacks the bases of weakened pine trees, including the roots, as well as the stumps of freshly felled trees. During outbreaks, also healthy trees may be attacked, but D. terebrans is rarely the only cause for the death of pine trees. Usually, pine trees are colonised by several species of bark beetles at the same time. Historically, D. terebrans was a serious pest of pine trees from which resin was collected for the production of turpentine (turpentine trees).

Attacks are initiated by a female, followed by a male. The pair constructs a gallery and the female lays eggs. The emerging larvae feed gregariously under the bark and create a chamber. Development is completed in around 3 months and the young adults might stay in the tree for overwintering.

The adult beetle is completely black. It is much larger than other species of Dendroctonus. The typical length is 6-7 mm, compared to 2-3 mm for Dendroctonus frontalis.