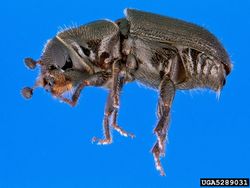 The beetle is a major pest of pine forests in parts of North and Central America. In North America, mainly southern and southeastern parts are affected. Populations undergo cyclic fluctuations every 7-12 years. The beetle introduces a pathogenic blue-stain fungus (Ophiostoma minus) into the trees which blocks water movement. During outbreaks, mass aggregations are initiated by pheromones like frontalin. The beetles bore into the bark and feed on the phloem. The outbreak areas are characterized by scattered pockets of dead and dying trees.

For a review of outbreaks see Gomez et al. (2020), for other details see the respective page in the BugwoodWiki.