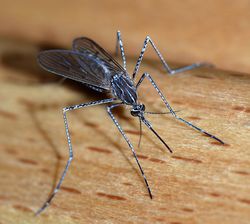 The genus contains around 40 species of blood-feeding mosquitoes which are mainly found in temperate and subtropical regions. The hosts are usually birds and mammals. Several species are known to be disease vectors. Breeding places are ground pools, marshes, streams or rock pools.

The adults are comparatively large with a length of around 10 mm. They resemble the species of the genus Culex. However they have a characteristic patch of hairs on the underside of the wings at the base of costa. The tarsi lack the adhesive hairs (pulvilli) found in many flies. The maxillary palpi are shorter than the proboscis.