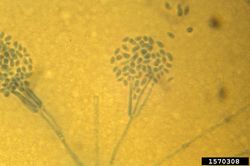 This genus of fungi contains around 30 species which are parasitic on plants or on other fungi. In the field of plant protection the genus is better known as useful antagonists to plant pathogenic fungi, see Clonostachys (antagonists) for details. However, some forms also cause plant diseases (this page).

The species are characterized by the penicillate conidiophores which are often dimorphic. The second form of conidiophores produce imbricate conidia that can collapse to slimy masses. The conidia are white, pale orange, or green. The teleomorph forms of this genus have been described under the genus Bionectria and are characterized by the shape and septation of the ascospores and the ascus morphology.