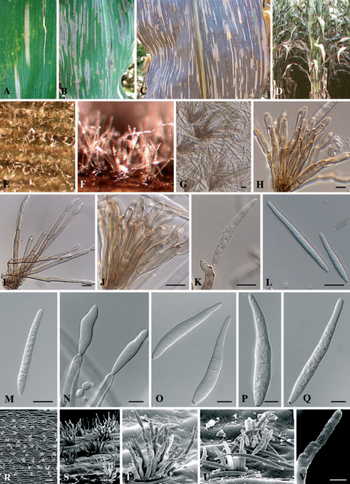 This fungus has been found in the Americas, Africa and Asia and causes a gray (grey) leaf spot disease on maize, similar to Cercospora zeae-maydis which also causes gray leaf spot. However, it produces no cercosporin in vitro. It has been previously described as type II of C. zeae-maydis. The elongated leaf lesions are confined to the veins, are up to 4 cm long and coalescing. The conidia have similar dimensions compared to those of C. zeae-maydis.

"C. zeina can be distinguished by having shorter conidiophores (up to 100 μm) and more broadly fusiform conidia, versus longer conidiophores (up to 180 μm) and broadly obclavate - subcylindrical conidia of C. zeae-maydis. Colonies of C. zeina grow more slowly in culture and lack the red pigment associated with cercosporin production, typical of C. zeae-maydis." (Crous et al. 2006)