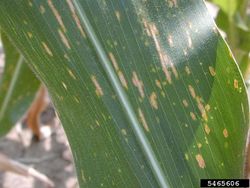 This fungus is widely distributed in maize-growing regions and causes grey leaf spot of maize. The disease can develop into serious epidemics, resulting in yield losses of more than 50%. In North America, it became common in the 1970s and widespread outbreaks developed in 1995 with an estimated 10% of the maize crop lost in Ohio.

The symptoms consist of long rectangular grey or tan spots, typically around 3-4 x ½ cm in size. Outbreaks develop under warm and humid conditions and the fungus survives mainly in host debris.