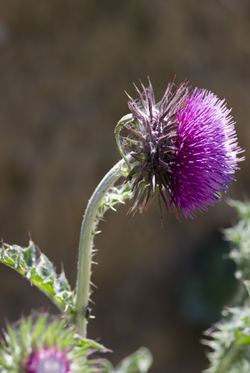 This genus of thistles contains more than 100 species. They are typically annual plants which grow up to 2 m high. Various species are invasive or are considered important agricultural weeds because of their abundant spines. For example, Carduus nutans and C. acanthoides are both invasive in North America and other regions but are also regarded as significant weeds in many countries of their native range in Europe and Asia.

The flower heads are spherical, the flowers are whitish or reddish, the stems are winged and the leaves are often covered with woolly hairs. Several species of weevils have been released in invasive populations as part of classical biological control programs, like Rhinocyllus conicus and Trichosirocalus horridus.