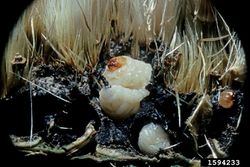 The weevil attacks musk thistle, milkthistle and Italian thistle. It was introduced into North America from Europe since 1968 and is commercially available. The weevils infest the flower heads, reducing the seeds. High beetle densities can reduce the seeds by more than 50%. Also in low density populations thistle populations are reduced over a period of several years.