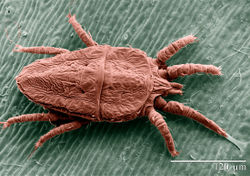 This mite has been regarded as a common mite in tropical and subtropical countries, feeding on many crops, including, citrus, tea, coffee, peach, coconut, apple, pear, olive, fig and grape. It has been reported to transmits several virus diseases like Citrus leprosis virus C.

Taxonomic note:
B. phoenicis has been originally described from a greenhouse in the Netherlands feeding on a Canary Island date palm (Phoenix canariensis). Taxonomic studies by Beard et al. (2015) have shown that B. phoenicis is actually a complex of 8 closely related species, with Brevipalpus phoenicis s.s. being far less common than several other species of the complex, for example Brevipalpus yothersi. Beard et al. confirmed the presence of B. phoenicis s.s. only in the Netherlands (on Phoenix canariensis) and Costa Rica (on Citrus sinensis). Specimens collected in 1924 from Cinnamomum camphora in the US Botanical Gardens in Washington D.C. were also confirmed to be B. phoenicis s.s., but the mite was not found there in more recent collections. Many records of B. phoenicis s.l. appear to apply to B. yothersi.