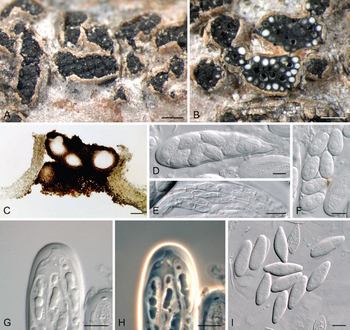 The fungus has a worldwide distribution and infects a large variety of woody crops, like fruit crops (e.g. grapevine, mango or apple), nuts (e.g. pistachio) or forest trees. The diseases caused include cankers, dieback, fruit rot, stem-end rot and shoot blight. Other symptoms have been described as resin flow, yellowing, wilting, gummosis and browning of the leaves, followed by leaf drop. Fruit infections may result in more than 50% yield losses.

The fungus enters the plant through small wounds (e.g. pruning wounds) and may survive as endophyte becoming a pathogen if the host is stressed. Conidia are predominantly dispersed by rain splashes, while ascospores spread in both air and water.

The fungus forms pycnidia which produce conidia. These are mainly fusiform, aseptate, widest near the middle and around 25 x 4 µm large. Pseudothecia which produce ascospores have been also observed in nature. Ascospores are ellipsoid, around 20 x 10 µm large.