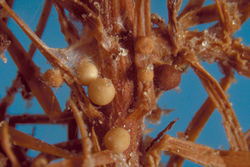 The fungus is widespread in warmer and tropical regions and infects many crops. It is soil-borne and often attacks the stem bases of its host (basal stem rot). It causes various lethal diseases, including southern blight, collar -, stem - or root rot and damping off. For example, southern stem rot is a serious disease of groundnuts in North America and yield losses can exceed 50%..

The sexual stage of the fungus produces thin, white fruiting bodies (basidiocarps) with cylindrical or club-shaped basidia, each containing 4 egg-shaped basidiospores which are about 5-6 µ long. In addition, it produces asexual sclerotia which are the main overwintering stage and remain viable for up to a year in the soil.

For isolates being studied as potential bioherbicides see Athelia rolfsii as (weed bioagent).