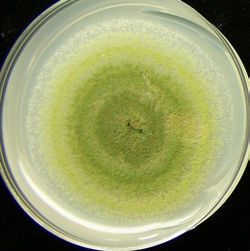 The fungus is found on various crops and stored products, especially in tropical and subtropical regions, where it is common in the soil. On maize, it can infest stalks and ears. It is also commonly associated with groundnuts and since most strains produce aflatoxins, it can become a serious problem in groundnut products. A. parasiticus can produce the aflatoxins B1, B2, G1, and G2. Aflatoxins are very potent carcinogens and are also hepatotoxic and immunosuppressive. Many strains form sclerotia. Conidia and sclerotia can survive in the soil for 3 years and are involved in the dispersal of the fungus. Conidia are spherical, about 5-8 µm in diameter.