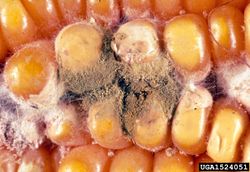 The fungus has a worldwide distribution and is mainly saprophytic. It can be found on stored products and decaying organic matter. However, it can be also parasitic and infect plants, e.g. it is found on developing kernels or on maize ears in the field, causing "Aspergillus ear rot".

It often produces aflatoxins which contaminate maize, ground nuts and other crops. Aflatoxins are highly toxic to humans and animals and are capable of causing cancer, mutations and deformities in embryoes. Contaminated grains and legumes must be destroyed and cause substantial economic losses to the farmer. The fungus is ubiquitous in air and soil. It overwinters as sclerotia. The spores persist even at temperatures up to 50°C. Infestations can be prevented by keeping products under dry and cool conditions.

The asexual spores are yellowish-green, spherical and 3-10  μm in diameter. The formation of sexual spores has been observed under laboratory conditions. Ascospores are spherical to slightly elongated, with a variable size and on average around 10 x 9 µm large. They have an equatorial ridge and small knobs on the surface.