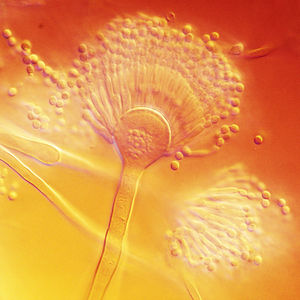 This genus contains more than 200 species of saprophytic moulds, plant pathogens and human pathogens. The moulds are extremely common, airborne and infest all types of organic matter under humid conditions. Many species produce mycotoxins.

The asexual coniophores originate from a well defined "foot cell" and end in a round "vesicle". Flask-shaped phialides are attached either directly to the vesicle (uniseriate), or via a supporting cell (biseriate). The phialides form chains of spherical conidia, typically 2-5 µm in diameter. The conidia have different colours, for example green, blue-green or black. Sexual stages are known from about one third of the species. These form round and closed cleistothecia which produce round asci and ascospores. The characters used for determining the species include conidia colour, structure and type of the phialides and shape of the vesicle.