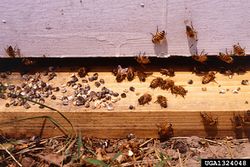 This fungus causes a lethal disease of honeybee broods and is widely distributed. Outbreaks are often triggered by high humidity in the hives (Yoder et al. 2017) and by treating colonies with antibiotics or miticides. In infected colonies the honey production is reduced by up to one third. The infected colonies are also predisposed to other infections, e.g. by the Deformed wing virus (Matsumoto et al., 2014). Such multiple infections can then lead to colony collapse.

The fungus can infect the larvae of all stages of the honey bee colony (workers, drones and queens), but the young larvae are most susceptible. The larvae mummify after death and become a hardened accumulation of hyphae and spores. The disease can spread to new hives through the re-use of contaminated frames and by other means.