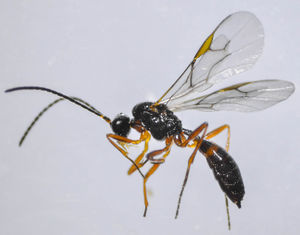 This genus of aphid endoparasitoids is widely distributed and contains around 70 species. Many are regarded as important biological control agents of aphids, e.g. cereal aphids. Several are produced commercially and are mainly used in greenhouses. Others have been released against invasive aphid species. They are often polyphagous and can parasitize aphid species from various genera. However, not all pest aphids are parasitized by a given parasitoid species, not even the commercially produced parasitoids.

The adults are up to 3 mm long and black. The female lays a single egg into a suitable nymphal stage of an aphid host. The larva develops and pupates inside the aphid, which dies and becomes mummified and cemented to the leaf surface. The adult parasitoid leaves the aphid mummy by making a round exit hole.

The genus is taxonomically well defined and can be recognized by the wing venation and the structures of the petiolus (the part connecting the abdomen to the thorax), the antennae and the ovipositor.

Other species are listed below.