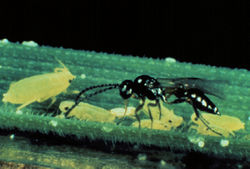 This wasp is believed to be native to the Indian-Pakistan region. However it has been introduced as a biological control agent into other regions and is now widely distributed. A. matricariae is a polyphagous solitary endoparasitoid of aphids and has been recorded from more than 40 species of Aphididae. For example, it is an important parasitoid of the Russian wheat aphid (Diuraphis noxia).

A. matricariae is commercially produced in several countries and is used in organically grown fruits and vegetables or in greenhouses.