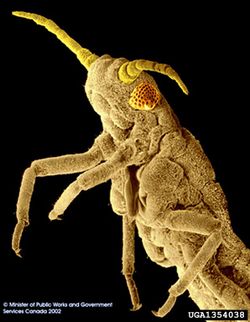 The aphid is believed to be native to southern Russia and western Asia, but has spread to various other regions and now has a world-wide distribution. The first record from South Africa is in 1978 and from North America in 1986. It is an important pest of wheat and barley and can infest also other small grain cereals and grasses.

Damage symptoms are longitudinal rolling of the leaves with yellowish to purple streaks, induced by a toxin the aphid injects during feeding. The rolled leaves protect the aphid colony. Infestations result in stunting of the host plant and often plant death. Yield losses of up to 50% have been reported from some countries.

Wingless females reproducing parthenogenetically are the dominant form during the summer. At this stage, females give birth to young aphids at a rate of up to 4-5 per day. The development from birth, through 4 nymphal stages to mature adult often lasts less than 2 weeks. Winged forms appear intermittently and move in the autumn to winter cereals. Males and sexual reproduction occurs in Europe and Asia (where winged females lay overwintering eggs in autumn) but is unknown in North America.

For control, mainly resistant cultivars are used. However, the appearance of various biotypes of D. noxia has made resistance breeding more difficult.