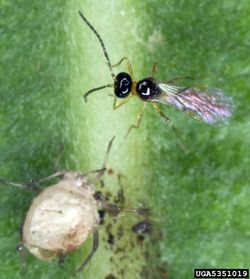 This species is an important endoparasitoid of aphids, commonly used as a biological control agent in greenhouse crops. The natural distribution includes Asia, Africa and the Mediterranean region from where it has been introduced into several countries, e.g. into Hawaii in 1999 against A. gossypii.

A. colemani has been commercially produced since 1991 in several European and North American countries and is used mainly in greenhouses against aphids like the cotton aphid (Aphis gossypii) or the green peach aphid (Myzus persicae). Under suitable conditions, it can maintain aphid populations at low levels, comparable to those achieved with pesticide applications, but with the advantage that it is safer and less time consuming to apply.