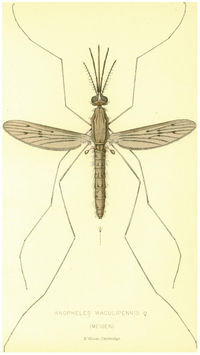 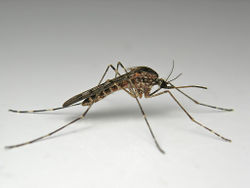 This mosquito represents a complex of closely related species in Europe and neighbouring regions. Apart from Anopheles maculipennis s.s. the complex includes A. atroparvus, A. messeae, as well as the less common species A. labranchiae, A. sacharovi, A. beklemishevi and others which have a restricted distribution.

An. maculipennis bites humans and other mammals. Before the eradication of malaria from Europe around the middle of the 1900s, the members of this complex were important vectors of this disease. They are still potential vectors, in case the disease is reintroduced.